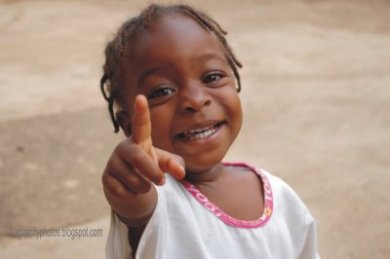 I am alive, says the African Child ( Pix source: LagosCityPhotos)

There has been substantial progress towards the achievement of MDG 4 globally. Latest figures for under-five mortality show a decline of 35% globally from 88 deaths per 1000 live births (1990) to 57 (2010). The numbers of under-fives worldwide who die annually has reduced significantly from over 12 million in 1990 to 7.6 million in 2010.

In Africa, the average rate of reduction of child mortality has been doubled from 1.2 percent decline a year between 1990-2000 to 2.4 percent between 2000 and 2010. However, looking at the time frame left between now and 2015, this overall rate of decline is not enough to meet the goal.

The target of this goal is to reduce by two thirds the under-five mortality rate between 1990 and 2015. Using the under-five mortality rate as a yardstick, there have been some disparities in the progress made by individual countries. Nations such as Egypt, Tunisia, and Libya have already surpassed the target. In contrast, Somalia, DR Congo, Burkina Faso, Chad and the Central African Republic are still far from reaching the target. Even in Cameron and South Africa, progress is still very slow, a result of the combination of several factors, the high prevalence of HIV/AIDS inclusive.

Globally, the four main killers of children under five years are pneumonia (18%), diarrheal diseases (15%), pre-term birth complications (12%) and birth asphyxia (9%). In Africa (excluding North Africa), diarrhea, malaria and pneumonia alone are responsible for more than half of the deaths of children below 5 years. On its own, malnutrition is an underlying cause of at least a third of these.

Using the infant mortality rate, which is often used as an indicator of the health status of a country, all African countries have recorded declines of between 1 and 72 percent. Some of the best performing countries in this regard are Egypt, Tunisia, Libya, Liberia and Morocco. Burkina Faso, Cameroon, CAR, DRC, Lesotho,Mauritania, Somalia and Zimbabwe were the worst performing countries, with less than 10 percent reductions.This relative progress in reducing infant mortality rates may have been as a result of focused interventions such as free immunization campaigns especially against the earlier identified killer diseases.

Overall, most of the nations in Africa have recorded large gains on all the indicators of the fourth goal. However, the continental progress rate is slow to meet up with the goal by 2015.  There also exists some disparities as children from rural and poorer households remain disproportionately affected. Therefore, bearing in mind the fact that most child deaths can be prevented, there should be a revitalized comprehensive and integrated effort against the major childhood diseases.

This is a summary of the MDG 2012 Report for Africa.