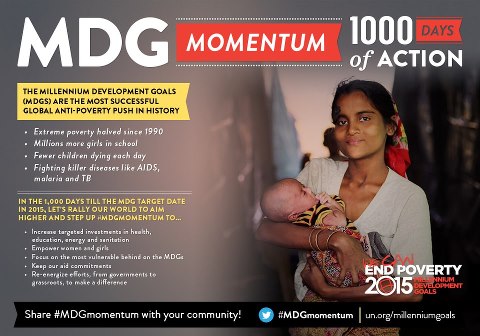 New York — To inspire further action, the United Nations and its partners around the world are marking 1,000 days to the end of 2015 – the target date for achieving the Millennium Development Goals (MDGs) – during the next week.

Starting on Friday 5 April – the actual milestone date – and running through to Friday 12 April, the UN will work with governments, civil society and international partners to mark “MDG Momentum: 1,000 Days of Action” in a variety of ways.

Today in Madrid, Spain, the Secretary-General and young people from the Spanish and European Youth Councils have observed the moment at a special event, joined by UN Development Programme (UNDP) Administrator Helen Clark and other heads of UN agencies, funds and programmes who are visiting for a senior-level UN meeting.

Since the MDGs were adopted by all UN Member States in 2000, governments, international organizations and civil society groups around the world have helped make tremendous progress to improve people’s lives.

The world’s extreme poverty rate has been cut in half since 1990. A record number of children are in primary school — with an equal number of girls and boys for the first time. Maternal and child mortality have dropped.

The world continues to fight killer diseases, such as malaria, tuberculosis and AIDS. Since 1990, two billion more people have gained access to safe drinking water.

To build on this success and accelerate action, the Secretary-General called on the international community to: increase targeted investments in health, education, energy and sanitation; empower women and girls; focus on the most vulnerable people; keep up aid commitments; and re-energize efforts from governments to grassroots groups to make a difference.

UNDP will be a major participant in the MDG Momentum campaign to amplify awareness of MDG achievements and the commitment to continue global progress.

“The more the world can achieve on the MDGs, the more it will be possible to build confidence and support for a bold and ambitious post-2015 development agenda,” UNDP Administrator Helen Clark said.

“Forty-five countries are now using the MDG Acceleration Framework to identify pragmatic solutions to speed up progress on lagging MDGs, and to reduce disparities in progress to date,” Helen Clark said.