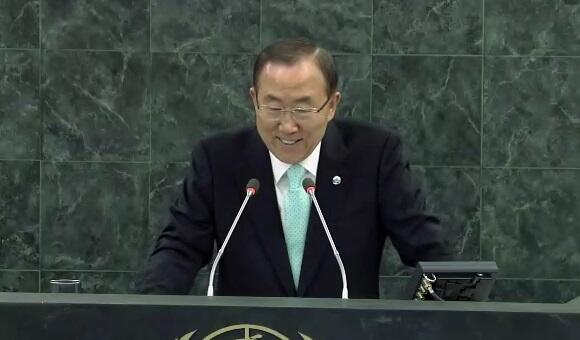 Mr Ban said this here when he launched an annual progress report on those global commitments.
“We are here today to help advance that effort for one and all,” Mr Ban was quoted as saying in a statement released by the UN Department of Public Information.

“However, much more needs to be done,” he emphasised, pointing out that, for the first time in a long while, official development assistance had fallen for two consecutive years in 2012, while the Doha Round of multilateral trade negotiations remained at an impasse.

As regards to the MDGs and the post-2015 development agenda, Mr Ban said greater progress towards the current targets will fuel confidence and mobilise support for the new framework.

Ms. Akhtar said now is the time to redouble efforts towards meeting the MDGs despite austerity and the lingering effects of the global economic slowdown.

Noting that official development assistance had dropped four percent to US$126 billion in 2012, after falling two percent in 2011, she said it is possible to reverse the trend because several countries have increased their aid, among them Australia, Austria, Iceland, Luxembourg, New Zealand, Korea and Switzerland.
She said the report made concrete recommendations in five areas: official development assistance, market access, debt sustainability, access to affordable essential medicines and access to new technologies. “All are attainable,” Ms Akhtar said, adding that there is no better way to make the transition to the post-2015 agenda than accomplishing unfinished tasks.

And Mr Kjorven acknowledged tremendous efforts by states towards meeting MDGs by 2015 despite scarce budgetary resources. “It was not by coincidence that a large number of targets have been achieved in a large number of countries,” he said.