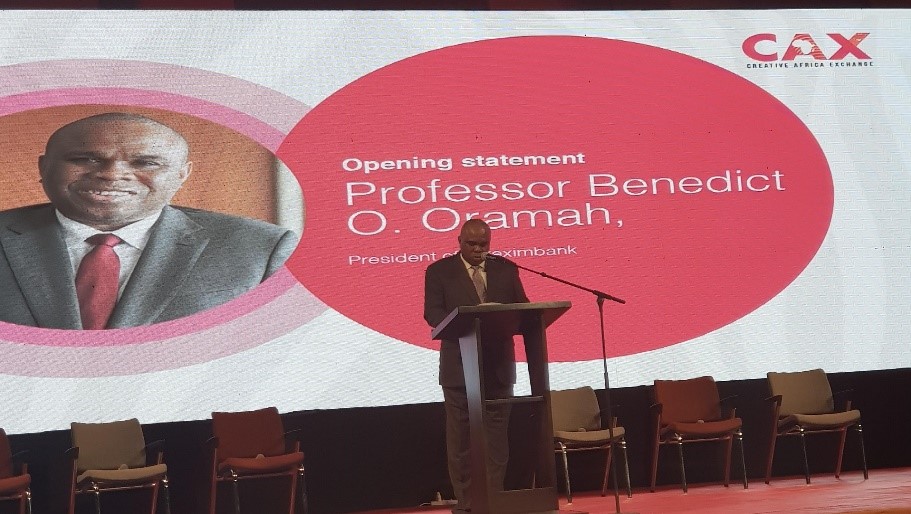 Afreximbank President Prof. Benedict Oramah speaking at the opening of the CAX WKND in Kigali.

The Creative Africa Exchange Weekend (CAX WKND), Africa’s first continental event dedicated to promoting exchange within the creative and cultural industry, kicked off in Kigali today with Prof. Benedict Oramah, President of the African Export-Import Bank (Afreximbank) announcing a $500-million envelope to support the production and trade of African cultural and creative products over the next two years.

Prof. Benedict Oramah told guests at the opening that the funds, which would build on what the Bank was already doing, would be accessible as lines of credit to banks, direct financing to operators and as guarantees.

He said that the creative economy was increasingly recognized as a significant sector and meaningful contributor to Africa’s gross domestic product and that the cultural and creative industries catalysed economic growth by fostering more inclusive, connected and collaborative societies.

He, however, noted that, while Africa had a deep pool of talent, it lacked the infrastructure and capacity to commercialize its creative talent and reap the vast fortunes lying in wait.

“Because of underinvestment in the creative and cultural industries, Africa is largely absent in the global market of ideas, values and aesthetics as conveyed through music, theatre, literature, film and television. African countries import overwhelmingly more creative goods than they export or trade amongst themselves,” he noted.

He commended Egypt’s “astronomical growth in creative exports over the last decade” and the Nollywood industry’s increasing importance which had prompted the Nigerian government, in its Economic Recovery and Growth plan, to forecast export revenues of $1 billion from the industry by 2020.

Prof. Oramah described the African market as the lowest hanging fruit for African creative products but noted that, until recently, “that market was fragmented and balkanized, such that a Senegalese knew more about creative products in France than in Ghana”.

“But today, change has come!” he said. With the African Continental Free Trade Agreement in force and trading starting in July, Africa would begin to break down the borders and a single market for creative products would emerge.

Also speaking, Dr. Ramson Owan, Managing Director of AITEO, stressed the need to focus on the commercial side of Africa’s creative talents and to begin to monetise them.

Rosemary Mbabazi, Minister of Youth and Culture of Rwanda, said that the creative industry would enhance collaboration and cooperation among African countries. The government of Rwanda had envisioned the creative and cultural industries as a key part of its economic strategy.

CAX WKND, which is featuring more than 2,000 participants and 250 exhibitors from 68 countries, is organised by Times Multimedia and sponsored by Afreximbank and other partners, as the opening act of activities planned under the CAX Programme to bring together African creative talents from the music, arts, design, fashion, literature, publishing, film and television sectors.

The consolidated marketplace is providing opportunity to buyers and sellers of the services of the creative and cultural industries to meet and explore business opportunities, enabling exhibitors and participants to network, consider investment proposals and increase customer base.

The CAX programme is aimed at facilitating investments in the creative and cultural sector through education, trade, industrialisation and provision of critical infrastructure to support economic transformation in alignment with continental initiatives, such as the AfCFTA and the Intra-African Trade Fair (IATF) rolled out by Afreximbank to stimulate trade among African countries. Launched during the inaugural IATF in Cairo in December 2018, CAX is the first exchange of its kind in Africa. CAX WKND will be followed by CAX Week to be held on the sidelines of IATF2020 in Kigali from 1 to 7 September.